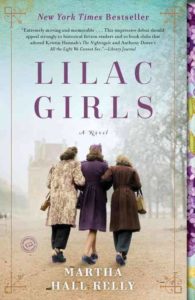 The horrors of the Nazi concentration camps are well-known, but until I learned of Martha Hall Kelly’s novel, Lilac Girls, I didn’t know there was one just for women. And I had never heard of Caroline Ferriday, the New York socialite who helped a group of Ravensbruck prisoners, the ones who survived horrific medical experiments.

Lilac Girls is told from the perspectives of three characters: Ferriday; Herta Oberheuser, the only female doctor at Ravensbruck; and a fictional Polish prisoner, Kasia Kuzmerick, based on a composite of some of the women who lived to tell their stories.

Much is known of Josef Mengele, the Nazis’ “Angel of Death” at Auschwitz, who performed unspeakable medical experiments on thousands of twins. But the doctors at Ravensbruck were just as sinister. To Kelly’s credit, she doesn’t portray Oberheuser solely as an evil person but makes her three-dimensional.

The details of the experiments on the women — who became known as the Rabbits because the damage to their legs made them hobble around — are difficult to read, but It’s important to tell these stories. We can never forget the atrocities committed during the Holocaust.

Lilac Girls spans two decades, from the late 1930s to the late 1950s, so it’s not just a “war” story. The book also focuses on the aftermath, when the Ravensbruck survivors went back home. In Poland, they had to deal with communism, and Kelly touches on how the system also restricted their freedom.

I’ll let you read the book to find out how the lives of Ferriday and the Rabbits came together. You won’t be disappointed. In short, Lilac Girls is the perfect blend of history and fiction.