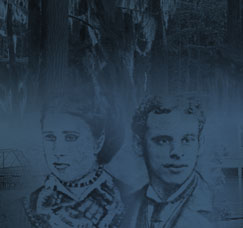 In the woods near Jefferson, Texas, Bessie Moore guards her body. She’s staying earthbound until her murder is avenged. She had attracted a great deal of attention during her brief stay in the east Texas town because of her beauty and the gemstones that earned her the sobriquet “Diamond Bessie.”

Unfortunately, the path to bring her killer to justice is fraught with delays created by a dream team of defense attorneys hired by his wealthy father. Based on true events and set amid the turbulence of Reconstruction and the burgeoning women’s right movement, Bessie’s story is a microcosm of life in 19th century America, not for the wealthy and privileged, but for someone on the fringe of society.

Years ago – more than I care to admit – I visited the small historic town of Jefferson in East Texas with my then-boyfriend. I had gone with him to Marshall, his hometown, to meet his parents, and he suggested a day trip to nearby Jefferson. I had never heard of the town. And I had grown up in Irving, a Dallas suburb, which was only three hours away.

“What’s there?” I asked Charlie.

“It used to be an inland river port,” he said.

An inland river port in the middle of northeast Texas? Okay.

We both love history and so of course we had to visit Jefferson’s historical museum, which is housed in the old post office and federal courthouse. We were wandering around looking at the various exhibits when I saw a full-page newspaper article in a display case. It was about the murder of Diamond Bessie in Jefferson. The article was published in a Dallas paper – nearly 60 years after the murder. I thought, “Why would a paper in Dallas care about a murder in a small town that happened in 1877?”

At the time, I was working as a television news reporter in Charleston, SC, but made a vow that when I got back to my home state, I would research the case and decide whether it was worthy of a novel. I had always wanted to write fiction, but had never had an idea that captivated me enough to keep me engaged.

Two years later, I got a job anchoring the evening news at a television station in San Antonio and immediately started my research. I quickly learned the story was more fascinating than I could have imagined. On the weekends and before my shift on the weekdays, I went to the library where I read hundreds of news articles about the case on microfilm from newspapers around the country via the inter-library loan system. This was long before newspapers.com! I also traveled to many of the places Bessie and Abe had lived or visited, and interviewed anybody I could find who knew anything about the history of the case and the people involved.

After two years of solid research, I had the facts, but not the “why.” Why did Bessie become a prostitute – what led her to that life? Why was she attracted to the man who would eventually kill her? Why didn’t she leave the relationship when he became abusive? Why did she marry him? What led him to kill Bessie? I wanted to know the answer to all these questions.

I’m not the only person captivated by this story. Jefferson’s Jessie Allen Wise Garden Club has performed a play, loosely based on the second trial, every year since 1955. A couple of nonfiction books have been written about the case, and a dear friend of mine, Susi Wolf, a master storyteller, performs a one-woman play about Bessie’s life as a prostitute and her death. A couple of musicians have even written songs about Bessie. But there’s never been a novel. Until now.

I don’t know how long it will take to see my book published, but I am working on it diligently to make it worthy enough for publication. If you would like to read my book when it’s published, sign up for my newsletter and I’ll keep you updated on my progress!

Sign up to get the latest news on The Lives of Diamond Bessie.

Sign up to get the latest news about The Lives of Diamond Bessie!