This page is still a work-in-progress but will eventually include a detailed breakdown of what’s fact and fiction in The Lives of Diamond Bessie. A cautionary note regarding Wikipedia. Much of the information on the Diamond Bessie page on Wikipedia is wrong. Everything I describe below is accurate.

As I noted in the afterword, other than her father’s death when she was ten years old, not much is known about Bessie’s upbringing. It was reported in newspapers after her murder that she had been “seduced” by a man and had left Canton, New York in shame. She reportedly went to nearby Watertown, but it’s unknown when she arrived and whether she had come directly from Canton.

I chose, from deep research, for Bessie’s story to reflect a plausible portrayal of a woman during her time who had 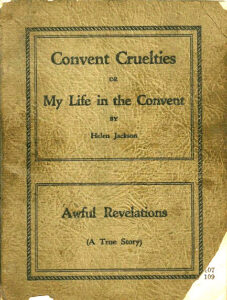 a lover out of wedlock and what the consequences of that often were. My research led me to the Magdalen Laundries of the nineteenth century, which then led to a few memoirs by women who had lived in convents for “fallen women.” These informed the first few chapters of my novel.

There is no record of Bessie having been pregnant or having lived in Buffalo, New York at the Sisters of Our Lady of Charity of the Refuge, which was also known as Sisters of the Good Shepherd, but the events portrayed are grounded in fact. The convent in Buffalo was founded in 1855 by four nuns from France. Construction on new buildings began in 1866. The structures described in my novel most likely had not been erected yet when Bessie was there, but they were soon after. 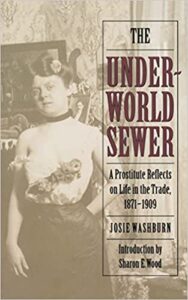 Fortunately, a few mid-to-late nineteenth century prostitutes fortuitously penned their stories, which shed much light on the reasons why women entered the world’s oldest profession and what their lives were like. Bessie’s story was the norm, not the exception, for women who had “fallen” and had few opportunities to make a living. (The memoirs I read are included in the bibliography section of this website.)

It’s unknown which brothel Bessie worked at in Watertown, New York, but there was a madam named Elizabeth Harding there at the time. I fictionalized Mrs. Harding’s background, as well as the names and backgrounds of most of Bessie’s roommates at the house and Bessie’s callers. Annie Stone was a real person and also reportedly a prostitute in Watertown. After Bessie’s murder in 1877, it was rumored that Bessie was Stone, who was the daughter of a shoemaker in nearby Burrville. Stone’s brother cleared up the misunderstanding, which was reported in an upstate New York newspaper, but the news never made it outside New York, and the rumor has persisted ever since. I included Annie/Mollie Stone in homage to her and fictionalized her moving to Chicago with Bessie and the subsequent events that happened with Mollie there.

In many ways, Bessie’s and Abe’s lives represent a microcosm of American life in the mid-1800s, albeit for those on the fringe of society. The two main immigrant groups at that time were the Irish and Germans. While Bessie was born in County Cork, Ireland, Abe was born in Cincinnati, Ohio, but both were children of immigrant parents seeking a better life in America.

While much of the story with Bessie alive sprang from my imagination, many of the events described are true. Abe and Bessie reportedly spent time together in Hot Springs, Arkansas, and they were kicked out of their hotel for “inappropriate” behavior. Newspaper articles also noted the incident with Abe intervening in the fight, when he offered his gun to the loser, for which he was taken to jail.

It was common for prostitutes in the north to winter in warmer climes, and Bessie was one of those who did so. Nell Otis was a real madam, but it’s unknown exactly where Bessie boarded in New Orleans. Abe followed Bessie there and they traveled together by steamboat to Cincinnati, where Bessie lived for a short time at a boardinghouse on Race Street before entering Frank Wright’s bordello. The couple’s relationship was tumultuous and culminated near the end of the year with Abe striking Bessie in front of the cigar boy. Soon after, she went back to Chicago. There was a raid on Jennie Williams’s brothel and Bessie’s name was printed in the Inter Ocean, although the account I used is from September 1876, not December.

There is proof of Bessie and Abe’s marriage. A marriage license was issued to them in Danville, Illinois, where they stopped on their way from Chicago to Texas. The couple attracted attention everywhere they went, and a reporter did interview them at the Aetna Hotel.

Bessie’s body wasn’t discovered until February 5, 1877, fifteen days after her murder, and her corpse was recognizable, causing much debate at the trials over whether she could have lain in the woods that long with such little decomposition.

The motive for Bessie’s murder has always been a source of speculation, with the main theories being that Abe wanted her diamonds, which he did covet, and that there was an unwanted unborn child, but the autopsy found that she was not pregnant.

Soon after Bessie’s death, it was rumored that her real name was Annie Stone, another prostitute in Watertown, who was the daughter of a shoemaker. A month after Bessie’s body was discovered, the Watertown Times looked into the rumor and reported in its March 9, 1877 edition that Bessie was really Annie Moore. But the rumor that she was Annie Stone still persists today. I chose to include her as a character in my novel in homage to her, and I created her assumed name, Mollie, for her life as a demi-mondaine, which was the custom.

When Abe returned to Cincinnati after her murder, he took Bessie’s trunk with him and paid a baggage man to dispose of it. It’s also true that Abe attempted suicide outside Jake Aug’s Clubhouse. A reporter for the Cincinnati Enquirer happened to be at the newspaper office next door at two-thirty a.m. and heard the gunshot.

John Vines was a widower with two young sons. He, Dr. Turner, and Edward Guthridge traveled to Cincinnati to identify Abe and bring him back to Texas, but the extradition process took much longer than how it is depicted in the novel.

The reporter Lafcadio Hearn, who was of Greek and Irish descent, lived in Cincinnati when Bessie was there, and was a well-known crime reporter, but back then most newspaper articles didn’t have bylines, so it’s unknown whether he covered Bessie’s murder. He did have a damaged left eye, which he was self-conscious of his entire life. Hearn moved to New Orleans in the fall of 1877, where he also made a name for himself as a newspaper writer before moving to Japan, where he became world famous for his writings on Japanese culture, and is still remembered there. There is no record of Hearn going to Jefferson to report on Abe’s imprisonment or trials; I included the writer in homage to him.

Thomas Snelbaker and George Ellis were involved in a blackmail scheme against Abe’s family and, when that didn’t work, they went to the prosecution. Snelbaker traveled to Texas, where he was discredited, but that actually happened at a hearing soon after Abe’s arrival back in Jefferson and not at the first trial. Several months after Snelbaker was discredited, he claimed to have found Bessie’s diamonds in a pawn ship in St. Louis. Abe had stopped in that city on the way back to Cincinnati after Bessie’s murder. But no jewels were ever introduced as evidence at the trials. In fact, the discovery was never mentioned again. Because of this, and the fact that Snelbaker had played both sides of the fence, I decided not to include what was most likely a false claim.

One interesting side note: While Abe was in the Marshall jail, his cellmate for a time was a man by the name of Jim Currie, a detective for the railroad who shot two members of an acting troupe after a performance in Marshall. Ben Porter died from his gunshot wound. The other actor survived but spent a month recovering in Marshall. His name was Maurice Barrymore, the patriarch of the famous acting family, whose great-granddaughter is actress Drew Barrymore.

The phonograph was a new invention in the late 1870s and a newspaper reported on a man who went to the Marshall jail to record Abe’s voice. I obviously fictionalized hearing Bessie on the recording.

Congressman David Culberson was not at the first trial because of his duties in Washington, but he was the lead defense attorney at the second trial and credited with Abe’s acquittal, partly for his cross-examination of chambermaid Jennie Simpson. Two black men served on the jury at the second trial, which was highly unusual at the time. It was most likely attributed to a March 1, 1880 Supreme Court decision in Strauder v. West Virginia, which ruled that barring blacks from jury service violated the Equal Protection Clause of the Fourteenth Amendment.

The events depicting Ed McDonald were either reported on or handed down as family lore. When he placed the headstone on Bessie’s grave, it was a mystery who had done so for a decade, until McDonald finally confessed to the good deed.