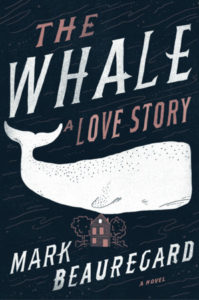 Before I read Mark Beauregard’s novel, The Whale: A Love Story, I knew very little about Herman Melville and Nathaniel Hawthorne.

I had read The Scarlet Letter, but, alas, not Moby Dick. In a way, it may be a good thing that I hadn’t read the tome, because now I can read it with insight I didn’t have before.

I had the good fortune to meet Beauregard recently at a writing workshop in Tucson, Arizona, where he was one of the instructors.

He talked about how understanding the “why” behind the “what” of a book – to know the story behind the story, so to speak – can give the reader a frame of reference about the work.

Melville met Hawthorne while writing Moby Dick, and the relationship greatly affected how he told the tale. Scholars have long known about the romantic feelings the two famous authors had for each other, and now Beauregard brings that relationship to the page.

He spent several years researching the men and their works before writing The Whale: A Love Story, and it shows in how exquisitely he brings the story alive.

You are transported to the Berkshires in western Massachusetts where Melville moved his family – despite being deep in debt – because he wanted to be near Hawthorne.

And you feel the depth of the torment Melville experienced when he couldn’t have what he loved most.

Being in the process of writing a historical novel myself, I can attest to the amount of research involved.

As an author, you feel a huge responsibility to accurately represent the lives of the characters – who were real people, whether famous or not – while also telling a story that readers will find engaging and worthwhile.

What Beauregard has accomplished is quite a feat and worthy of your time.