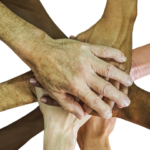 When author Lionel Shriver gave her now-notorious speech on cultural appropriation at the Brisbane Writer’s Festival, it caused a firestorm, to put it mildly.

The issue made me think of my own writing. The main character in my historical novel is a nineteenth century prostitute. I’ve never been a prostitute, so does that mean I can’t write from the perspective of one?

I also recently wrote a short story in which one of the main characters is a Cherokee medicine woman. Do I have the right to do that?

I look more Scandinavian than American Indian with my blonde hair and blue eyes, but I have Native American blood on my paternal grandmother’s side, and I grew up hearing family stories about our heritage.

The contention also made me think of my personal life.

When I was growing up, my grandmother bought a piñata every year for my birthday, which my friends and I happily beat with a stick until the Papier Mache object (it was usually an animal) burst and the candy inside spilled to the ground.

Was I inappropriately appropriating the Mexican culture? I’ve always loved the Hispanic culture – partly because it was introduced in a fun, positive way.

As a writer of historical fiction, I love research, so of course I googled cultural appropriation.

The first result is the Wikipedia entry, which defines it as “the adoption or use of elements of one culture by members of another culture.”

The definition goes on to say that “cultural appropriation may be perceived as controversial, even harmful, notably when the cultural property of a minority group is used by members of the dominant culture without the consent of the members of the originating culture.”

Let’s set aside the word consent for the time being.

The other words I find interesting are cultural property. For that definition, Wikipedia cites The Hague’s Convention for the Protection of Cultural Property in the Event of Armed Conflict:

“Cultural property are physical items that are part of the cultural heritage of a group or society. They include such items as historic buildings, works of art, archaeological sites, libraries, and museums.”

That was in 1954. Fast forward to 2005 when Fordham University Law Professor Susan Scafidi’s book, Who Owns Culture? Appropriation and Authenticity in American Law, was published. Scafidi, who is white, defined cultural appropriation as “taking intellectual property, traditional knowledge, cultural expressions, or artifacts from someone else’s culture without permission.”

I was 13 years old when the movie “10” came out in 1979. I was too young to see it (according to my parents), but like almost everyone my age and older, I’m familiar with the famous scene of Bo Derek running along the beach, her cornrow-beaded hair gently swaying in the ocean breeze.

I don’t remember any sort of outcry over her hairstyle. I do remember that Derek made the hairstyle popular, and I knew, even at 13, that the style was African. Isn’t that a good thing? Today, when celebrities, like Kim Kardashian, wear boxer braids – the new name for cornrows – they’re called racist.

Would I write a novel from the point of view of a black woman? No, because I’m not confident that I could do so convincingly.

But the late novelist, Ernest Tidyman, who was white, wrote the popular Shaft series of detective novels in the 1970s, which featured a badass black detective as the main character.

Instead of an outcry over cultural appropriation, the NAACP gave Tidyman an award. I can’t imagine that happening today.

Back to my short story with the Cherokee medicine woman.

The character is based on someone I know, who also has Cherokee blood, and is a shaman. I did get my friend’s permission to fictionalize some of her experiences because they are specific to her. Which brings me to the “consent” issue.

If an author isn’t accurate in his portrayal of a member of another culture, then he should be called out. But to deny someone the right to write fiction on whatever topic she chooses, is more than insulting.

It’s scary. Who’s going to serve as the culture police? Is someone going to form a gestapo, pointing out every instance of what is perceived to be an inappropriate use of another culture?

Because that’s what it is: someone’s perception. That is what has changed over the years. How else do you go from the NAACP honoring Ernest Tidyman to “people questioning whether it’s appropriate for white people to eat pad Thai,” as Shriver pointed out in her Brisbane speech. I love Thai food!

Why do some people have to automatically think that someone is being disrespectful when copying another culture? Isn’t imitation the sincerest form of flattery? Shouldn’t it be seen as positive?

As far as writing fiction, I agree with Shriver when she argued that “any story you can make yours is yours to tell, and trying to push the boundaries of the author’s personal experience is part of a fiction writer’s job.” Couldn’t have said it better myself.